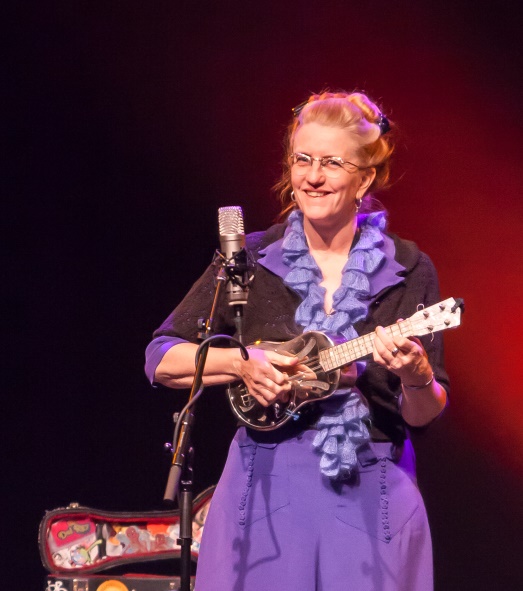 It is with the greatest pleasure that I announce Learn To Uke’s first blues workshop with with the brilliant virtuosic Blues Queen – Del Rey. She takes the ukulele to a new level, and will have you playing the blues either with chords or picking if you want to, by ear. Then, stick around and you’ll be wowed when see her play a show for you. Everyone who’s seen her comes away impressed. Don’t miss it!

I started playing guitar when I was four. At the age of thirteen I was introduced to the world of traditional acoustic music, when a friend and I stumbled into a concert at Folk Arts Rare Records in San Diego. About 20 people were sitting on the floor under the record bins listening to a kid named Tom Waits play his original songs.

Lou Curtiss, proprietor of Folk Arts and artistic director of the San Diego Folk Festival suggested I quit wasting my time playing “Stairway to Heaven” and listen to some Memphis Minnie. He put me on stage with Sam Chatmon when I was fourteen, and introduced me to Lydia Mendoza and Howard Armstrong. Lou gave me recordings that still influence everything I do on solo acoustic guitar. I soaked up country blues, stride piano, classic jazz and hillbilly boogie. It was a musical education hanging around the record shop.

Thirty years later, I became fascinated with the ukulele. I try to play the same kind of complicated rhythmic blues and ragtime on four strings as on six. I expect a lot out of the little instrument.

“The ‘ukulele taken to a new level of musicianship”. (John Book)

“Virtuosic in just the right way, which is to say, in order to realize a musical idea. A very nice unlikely blend of things, accessible, slightly nostalgic, but fresh and thoughtful. ” (CD Baby review, “At The Ukeshack #1)

I’ve contributed to projects in honor of The Mississippi Sheiks, Sister Rosetta Tharpe and Johnny Cash. I occasionally write about music for various publications, including Acoustic Guitar.

I’m sure you’re all excited now, so do…

The Ukulele – Scientifically Proven To Make You Happy?
Scroll to top